Tuck Dean Danos to Step Down After 19 Years

Tuck School of Business Dean Paul Danos has announced his plans to step down when his current term ends in 2015. At 19 years, his tenure is the longest in Tuck’s history and one of the longest in management education. By the end of his fifth term, nearly half of Tuck’s 10,000-plus living alumni will have graduated under his deanship. 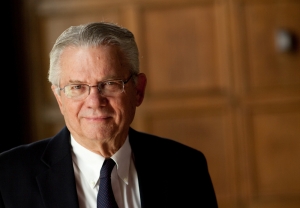 Danos joined Tuck in 1995 and has guided the school through one of the most transformative periods in its history. He led a dramatic expansion of Tuck’s world-class faculty; oversaw the launch of nine centers and initiatives; and introduced a broad array of MBA curriculum innovations that enabled the school to keep pace with the ever-changing landscape of global business.

“I realize that none of our achievements would have been possible without the contributions of our entire community—our skilled and caring faculty, our outstanding students, our committed staff, and our loyal and dedicated alumni,” Danos said in a letter to the Tuck community announcing  that he would not seek reappointment for a sixth term.

“Your support and encouragement over the last two decades has been vital to Tuck’s continued success and has meant the world to me. Tuck is a great school with a virtuous circle of caring people who will ensure that its future will be as bright as its past,” he added.

Under Danos, Tuck has consistently been cited for the excellence of its MBA program, and is known for its world-leading alumni giving rate, which is nearly three times the average participation rate of other business schools.

Dartmouth President Phil Hanlon also expressed the school’s gratitude to Dean Danos, saying his “commitment to the quality of the MBA program and to preparing students for a lifetime of responsible leadership has earned Tuck a unique place among the world’s top graduate schools of business. ”

At Tuck, Danos also presided over an increase in both the size and quality of the student body, as classes became more international, diverse, and balanced between genders. The size of the faculty also grew during this period. Under his leadership, the number of full-time faculty at Tuck rose from 36 to 51, as did their levels recognition and accomplishment.

Board of Overseers Chair Christopher J. Williams said he anticipates significant global interest in this deanship, since “The opportunity to lead one of the world’s truly great business schools is a rare one.”

President Hanlon will be working with incoming Provost Carolyn Dever to form a search committee and will be seeking input from faculty, senior administrators, students, and alumni as they conduct a thoughtful search for the next dean. Williams said Tuck will likely announce a new dean in early 2015. Is Finance a Good Career Path and Why? MBA Consultants are Worth it When Applying to Elite Schools